Mr. Montarbo is a frequent presenter at various workers’ compensation claims conferences including State Bar of California Workers Compensation Section, ExamWork, MedLink, the National Disability and Workers’ Compensation Conference, CAJAPA, DVICA as well as having provided the defense perspective on a number of occasions at the CAAA annual conference.

Mr. Montarbo is also an Adjunct Professor at UOP, McGeorge School of Law, as well as the Author and Assistant Editor of the Work Comp Index: A Topical Guide to California Workers’ Compensation Law, published by Lexis/Nexis.

Mr. Montarbo also is the developer and architect of the CompCalc Rating and Indemnity Apps.

The book and its Table of Contents, both of which are set up alphabetically by subject/topic, serve as a quick reference tool and a starting point for more in-depth legal research. The California workers’ compensation system has changed so rapidly in substantive and procedural areas that its participants have been inundated with information from many sources.

This topical guide leads its users simply, directly, and quickly to the applicable statutory, case law, rule, and to a wide variety of key publications, texts, and treatises that have treated the entire range of issues and developments in the field. 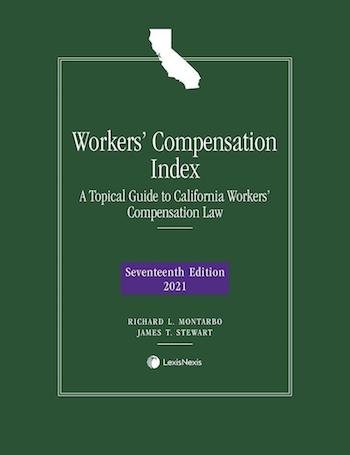